Truck vibrations: Is your business falling foul of the law?

Body vibrations on forklift trucks have been a hot topic from the moment European Directive 2002/44/EC shone the spotlight on them. The big question is whether the use of damping techniques and better seats is really worthwhile? Wouldn't it be 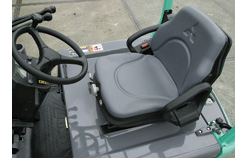 better to meet the directive another way?

A recent series of on-site tests provide the answer.

According to Directive 2002/44/EC on body vibrations, employers must prevent their employees from being exposed to vibrations greater than 1.15m/s2. The same directive also states that employers must take preventative measures if vibrations over an eight-hour workday exceed the action value of 0.5m/s2. In an attempt to meet these conditions, forklift manufacturers are using different techniques including suspension (floating) cabs, suspended powertrains (in diesel trucks), and minimum clearance for mast and chassis. More attention is also being paid to the quality of the driver's seat and the type of tyres fitted.

Extensive testing revealed that these measures do have a positive effect on reducing body vibrations. A good seat, for example, helps cut vibration levels - but only if it is correctly adjusted to suit the body weight of the driver. Beware, though... a wrongly adjusted seat actually amplifies vibrations!

In the tests, a variety of forklift trucks - both electric and IC engine - were then run with a range of different tyres. Testers measured vibrations on trucks fitted with solid rubber and pneumatic tyres, as well as with solid rubber tyres which had perforations in the intermediate layer. They ran the trucks over three different surfaces: relatively flat asphalt, paving stones and rain gutters. Across all three surfaces solid rubber tyres produced the best results - and those with perforations performed best of all. On asphalt, the pneumatic tyres were found to create an imbalance that actually increases vibrations. Indeed, these tyres only performed well on paving stones while carrying a load.

Naturally, most of the tests involved modern trucks, seats and tyres. Just for comparison's sake, measurements were also taken on a 20-year-old electric forklift truck with a rattling pallet box tipper, worn cushion tyres and a seat without suspension. Astonishingly, this truck had the lowest vibration values of all! Why? Well, this truck had a much lower travel speed than its modern competitors and that is the key to really cutting vibrations. But before you drag your old truck from the knacker's yard, remember that cutting driving speeds will have exactly the same effect on a modern truck.

Virtually no forklift trucks on test could perform below the legal limit of 0.5m/s2 in an eight-hour day. To get your vibrations as low as possible you need to ensure the ground is as smooth as possible; suspension seats must be correctly adjusted to body weight and the right tyre is a must. Finally, cutting speed - especially when crossing awkward terrain - will deliver the greatest reductions of all. 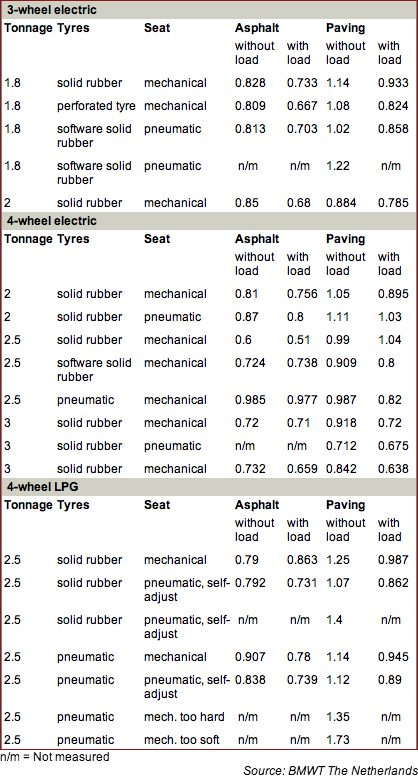 Was this article helpful?
Yes
No
Thanks for your feedback
Share
Shared 0 times

Operating a dangerous forklift has left one teenager hospitalised with serious injuries and a businessman’s livelihood in ruins.
How vital yet inexpensive inspection safeguards your workers, truck and company
Full story..
Stay legal

Are mobile phones putting your business at risk?

Tired of telling operators to belt up? (buckle up)

Throughout Europe, managers are required by law to ensure the safety of employees… and nowhere is this more important than in materials handling operations.
Full story..
Stay legal

Operating a dangerous forklift has left one teenager hospitalised with serious injuries and a businessman’s livelihood in ruins.
How vital yet inexpensive inspection safeguards your workers, truck and company
Full story..
Stay legal

Are mobile phones putting your business at risk?